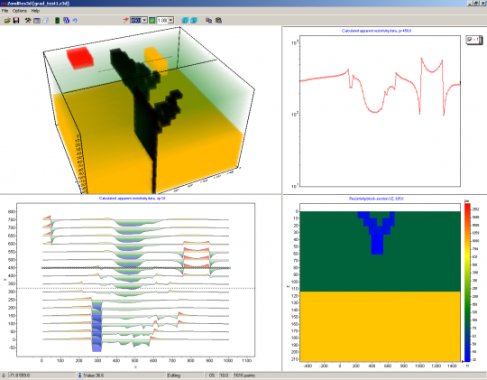 ZondRes3D is designed for three-dimensional interpretation of electrical tomography resistivity and induced polarization data in land, cross-borehole and marine variants.

Electrical tomography is a whole technique including the method of field observations and technology of processing and field data interpretation. Its feature is multiple reusing as a source and receiver just the same electrodes position, fixed on a site.

Such approach allows from one hand to work with a modern high-performance instruments, and on the other hand to apply effective algorithms of modeling and inversion. For interpretation of electrical tomography data two- and three- dimensional models is used . It significantly extends the range of electric prospecting solved problems due to sections investigating that are considerably different from «classic» horizontal-layered.

Resolution and thus interpretation quality of electrical tomography is closely connected with the number and density of measurements on one site. Their number usually reaches first thousand that is why the question on field measurements efficiency has basic importance and in many aspects defines possibility of practical using of this method. Special equipment with programmed automatic switching of electrodes is applied for reaching of maximum effectiveness of field works.

ZondRes3D uses simple and clear data format allowing easily combine various systems of observation, including different variants of the topography setting up and other additional information.

The program works with any (applied in electric prospecting) types of electrodes array (two-, three- and four- electrodes) or their combinations. Well-known data formats are also supported.

Special mode for working with middle gradient array is provided that allows to calculate quickly and visualize data in the form freandly for the interpreter.

Some variants of three- dimensional model display in the form of various sections and isosurfaces are realized in the program.

Important stage which prevents field measurement is mathematical modeling of geoelectric structure of work site. Modeling gives chance to estimate the level of the signal and to make a choice of optimum parameters of the observation system for decision of the set geological problem. ZondRes3D has great range of tools for mathematical modeling and analysis of fields sensitivity of DC and induced polarization.

As the general task of the program is inversion for geoelectric section parameters — some variants of inverse problem decision are realized in ZondRes3D basic of them are: smoothing inversion — to get smooth and focusing — to get piece-smoothed distribution of geoelectric parameters with depth.

While working out at the program special attention was paid to a priori data accounting. Because of equivalence of inverse geophysical problems, quality of the obtained results strongly depends on the amount of a priori data used. In ZondRes3D here is possibility of weights setting for measurements, fixing and limits making of changing features of different cells, using of a priori model as major in inversion. The robust schemas of noise estimation are realized in the software. There is also possibility to import and display results of measurements by other methods and cross-boreholes data that improve interpretation results.

More details on the functionality of the software can be found by downloading the user manual (2.99 mb) as well as its demo-version (8.4 mb) or by watching video reviews and tutorials.