Increased requirements to the results of high-resolution marine engineering seismic have led to a great improvement in UHR data processing flow. Traditional processing techniques, based on oil-and-gas industry flows are not fully applicable to HR/UHR marine seismic as they do not account to the specifics of the latter, such as higher frequency band, less accurate -- when compared to the data resolution -- towing depth and steering control, etc. Use of a combination of both oil-and-gas industry-standard algorithms (denoising, SRME, 3D regularization, deghosting, PSTKM, etc.) and HR/UHR specific algorithms (such as high- resolution marine statics, zero-offset multiple suppression etc.), is essential for achieving high quality HR/UHR seismic images (Vakulenko, 2016).

Due to very high frequencies of the UHR sources, the optimal towing depth of the source-receiver spread is much closer to the sea surface, comparing to traditional seismic, and could reach up to 15 cm. This results in significant increase in noise level of the seismic data. Taking into account relatively small fold of engineering surveys, modern noise attenuation techniques are extremely important. Often, this part of the processing flow is underestimated by the processors, who are simply use very severe low-cut filters, which potentially results in loosing of useful low frequency content and resolution, as the latest is the function of the bandwidth range and not the highest frequency only.

We have a range of modern noise attenuation algorithms, such as Time-Frequency Dependent Noise Attenuation, Sparse Radon Transform, Sparse FK Filter, who are capable to handle non-regular data, as well as traditional filtering techniques. Our noise attenuation approach is not a simple filtering, applied to the data with eyes shut, it’s a technique, which is dedicated to preserve your signal as much as possible, while removing unwanted noise energy.

Very high frequency content of the VHR/UHR surveys results in less than a meter signal wavelength. Such short wavelengths introduce one of the biggest challenges in UHR marine data processing - static compensation. Even small variations in source/streamer towing depths due to weather conditions and currents lead to significant static shifts, different for each receiver group. In case this statics is not fully resolved, CDP stacking will be performed not in-phase with loosing resolution and potential benefits of UHR data acquisition.

We use various algorithms to compensate static corrections to provide coherency stacking with best possible resolution, depending on the acquisition and source type. Normally, source and receiver heave statics needs to be estimated and applied early in the flow to provide reliable data for other procedures, such as velocity analysis and multiple elimination.

Specific algorithms for UHR statics estimation, such as common offset spatial averaging (COSA) are also available and can be applied if needed.

Small volume airguns, sparkers and boomers are typically used as a sources for high resolution marine data acquisition. Each source type has its own signature characteristics as they are using different physical principles of acoustic signal generation.

Different companies perform high resolution marine seismic surveys with various types of acquisition techniques - it can be optimal towing depth (source and receivers are towed on the λ/4 depth, where λ - is the signal wavelength), slanted cable or deep-tow surveys. Each type has its own advantages and disadvantages, but all of them require adequate designature techniques, as the ghosts and residual reverberations significantly degrade the final image resolution.

Multiple reflections is a well-known problem in marine seismic data processing. Various multiple removal techniques are exist and can be applied, depending on the multiple type and underlying assumptions of the method.

In engineering marine seismic applications multiple removal procedure is complicated by relatively small number of channels or even single-channel acquisitions, which could reduce the efficiency of the industry-standard methods. 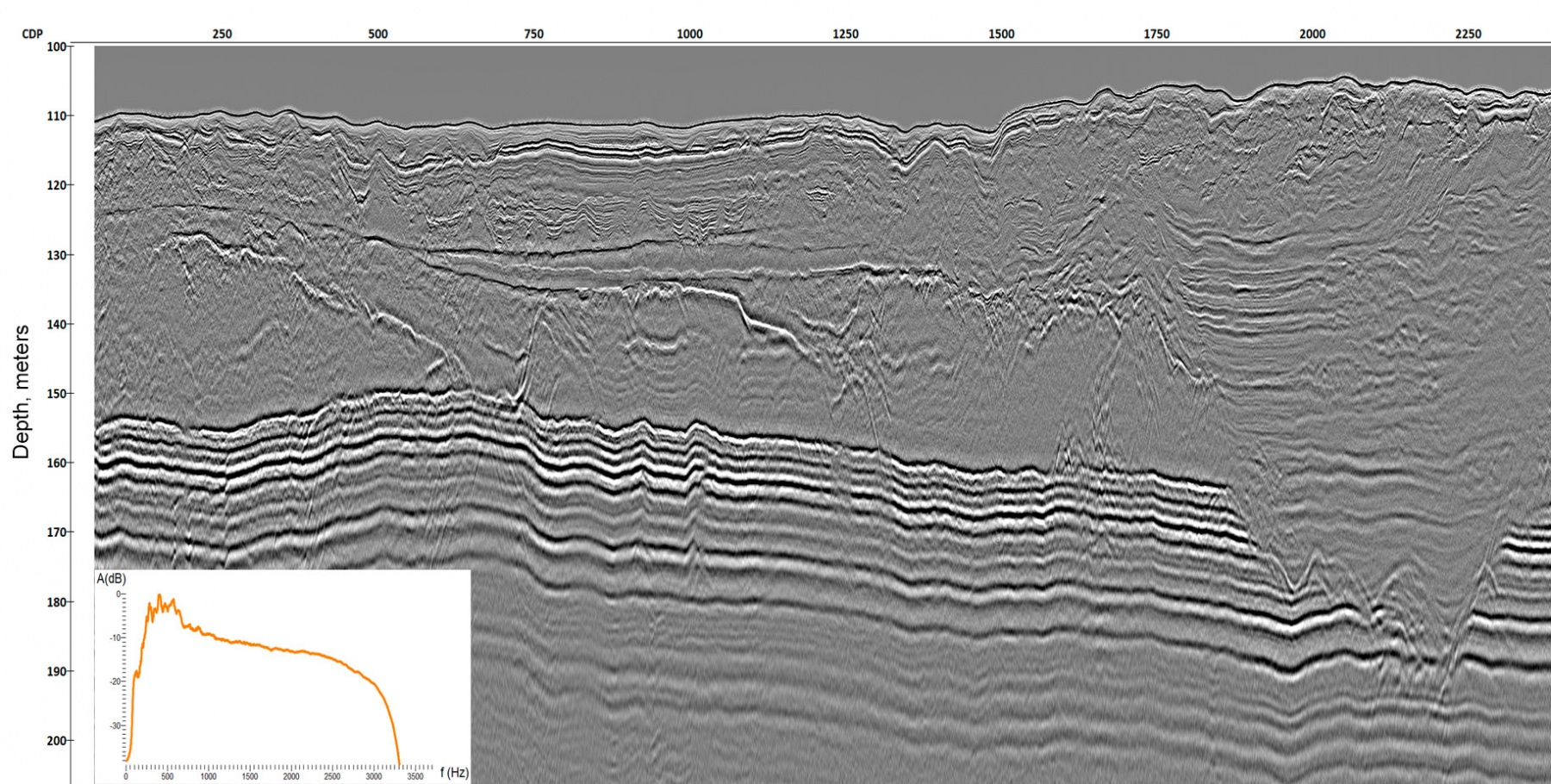 Significantly increased  demands to the results of high-resolution marine engineering seismic have led to a great technological improvement in the process of data acquisition -  3D surveys, flip-flop shooting, slanted cable acquisitions with very dense shot point and receiver interval are getting more and more common nowadays.

Acquisition and processing of HR/UHR requires a complex approach and should not be considered separately from each other, as poor data quality usually result in poor resulting image.